“Both suites are in a quasi neo-baroque style ... all that was old is new again!”

Terry Schumacher is known throughout the classical guitar world as a performer, experimenter, musicologist music maker extraordinaire. He loves to perform and promote new works, which is just what he’ll be doing at his performance, set for 7 pm Saturday, March 2, at the Lincoln City Cultural Center.

The program will include two premieres: “Suite for Baroque Lute” by Eric A. Foster of San Diego, Calif., and “Divertimento Barroco” by Leo Brouwer of Madrid, Spain. Both compositions were commissioned by Schumacher. “Both suites are in a quasi neo-baroque style,” the performer said. “All that was old is new again!” He’s also planning a bunch of Bach, and a selection of show tunes.

Schumacher served in the Army and earned a bachelor’s degree in economics and psychology, but it wasn’t until he was 30 that he began to play the guitar. He studied lute and guitar performance and composition at Lewis & Clark College and Marylhurst University, then joined forces with Portland luthier Robert Lundberg studying lutes and their music. It was a collaboration that lasted from 1978 until Lundberg’s death in 2001. Schumacher has developed designs for lutes and guitars with the help of many other world-class luthiers, including Jeffrey Elliot and George Smith. His renowned 11-string guitar design is being manufactured (hand-built) by Kenny Hill Guitar Company in Felton, Calif.

A lifelong student, Schumacher has attended master classes in lute, guitar and theorbo in many locations across North America, including the Eastman School of Music, the University of British Columbia, Northwestern University and the University of North Carolina. From 1987-1998, he served as the music editor for the Lute Society of America.

Now living on the Oregon Coast, he performs at many venues throughout Oregon. He continues to work on his “Project Tranfusion,” creating new literature for the Baroque Lute. His manuscript on the subject is called “Lutius Maximus.”

Tickets are $25 in advance, $23 seniors, $10 youth ages 18 and younger, with a $2 discount for LCCC members. To purchase, head lincolncityculturalcenter.orgor drop by the LCCC Information Center, open from 9 am to 5 pm Thursday through Monday (closed Tuesday and Wednesday). For more information, call 541-994-9994. 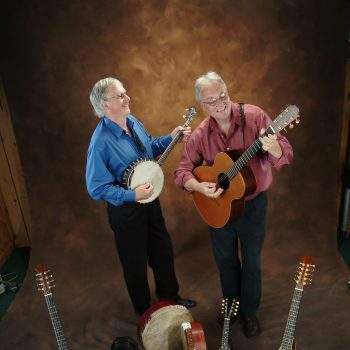 LCCC Presents: Men of Worth (In Person)