LINCOLN CITY – Acoustic Guitar magazine says: “There are few musicians in the genre bringing as much creative spark and low-key mojo” as Mary Flower. A writer for Living Blues opined that Mary “marries acoustic blues with touches of ragtime, folk, and jazz…the interplay is always interesting, often provocative, and sometimes breathtaking.”

The Lincoln City Cultural Center is proud to present guitarist Mary Flower, who will perform with the BBQ Boys – aka a “jug band sans the jug” – live and in-person at 7 pm on Saturday, Oct. 24. This three-set concert, originally scheduled for Sept. 9, was postponed by the Echo Mountain Fire. All tickets for the original date will be honored, and a few more are still available. To get yours, head to https://lincolncityculturalcenter.thundertix.com/

As part of the QuaranTunes series, this Oct. 24 concert can be enjoyed two ways:

1) Table seating in the LCCC auditorium before a small audience of 25, seated in singles and couples at socially-distant tables. Masks are required.

2) VIP Live Stream, broadcast from the LCCC auditorium to your laptop, phone, tablet or TV through the LCCC’s private YouTube channel. Purchase a ticket to the VIP Live feed, and they’ll send you the link prior to the show.

An internationally known and award-winning picker, singer/songwriter and teacher, the Midwest native relocated from Denver to the vibrant Portland, Oregon music scene in in 2004. She continues to please crowds and critics at folk festivals, teaching seminars and concert stages domestically and abroad, that include Merlefest, Kerrville, King Biscuit, Prairie Home Companion and the Vancouver Folk Festival, among many.

The BBQ Boys are a four-piece jazz, blues and jug band that has performed with many well known artists such as Jim Kweskin, Geoff Muldaur, Maria Muldaur, John Sebastian, David Grisman, Dan Hicks and Mary Flower.

Originally the Barbecue Orchestra, it was started by famed washtub bass and jug blower Fritz Richmond (of the original Jim Kweskin Jug Band) and Turtle VanDemarr (guitar player with Dan Hicks and the Hot Licks). In 2008 Fritz passed on to jug band heaven and Turtle began playing music in his daughter’s band. The remaining members Stew, Spud and Doc added a sousaphone player par excellence, Mark.

The BBQ Boys have played many concerts with Jim Kweskin and the Jug Band, in San Francisco’s Great American Music Hall, The Roots and Rhythm Festival in Providence, R.I., Club 47 in Massachusetts, The Waterfront Blues Festival in Portland, and The National Jug Band Jubilee in Louisville, Ky.

In 2013 they joined forces with Mary Flower as a jazz and blues infected jug band (sans jug) and have created new masterpieces of old standbys and originals  adding rich harmonies and searing solos.

The BBQ Boys are:

Stew Dodge on fiddle and vocals. He is the owner and CEO of Stew Dodge Sound Co.

Spud Siegel on mandolin, mandola and vocals. He is a ship’s captain on the Columbia River.

Doc Stein on dobro, guitar and vocals. He is an ER doc in his spare time.

Mark Vehrencamp on sousaphone. He is a railroad engineer for Union Pacific who also plays with the Vancouver Symphony. 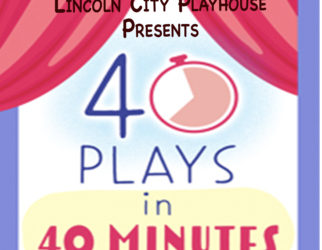 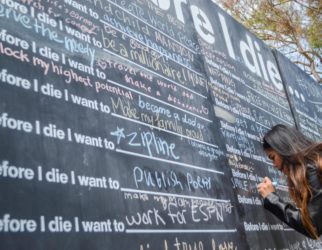 Opening Day “Before I Die” Installation